Mycotoxins, toxic metabolites produced by mold, have adverse effects on numerous body systems, including the gastrointestinal tract. This is a topic that I have personally explored in great depth, due to my own experience with toxic mold exposure. Read on to learn how mycotoxins impact the GI tract and gut microbiota, and how you can restore your gut health post-toxic mold exposure.

Mycotoxins are the toxic secondary metabolites produced by molds such as Aspergillus, Fusarium, Penicillium, and Stachybotrys and are commonly encountered in water-damaged buildings and contaminated food. While a few mycotoxins have beneficial applications – the antibiotic compound Penicillin is derived from Penicillium fungi and the mycotoxin citrinin is used to produce cheese, sake, and miso – the majority of mycotoxins are highly toxic and capable of causing disease in animals and humans. Trichothecenes, fumonisins, ochratoxin, and aflatoxins are the most commonly-encountered harmful mycotoxins.

Research has found that 25 percent of the world’s crops, including grains, nuts, wine, spices, and coffee, are contaminated by mycotoxins due to poor harvesting practices, improper food storage, and damp conditions during food transport and processing. Trichothecenes and ochratoxin occur in water-damaged building when mold proliferates on damp wood fiberboard, ceiling tiles, and inside air conditioning ducts. In the U.S. alone, 43 percent of buildings have current water damage and 85 percent have past water damage; these shocking figures indicate that mycotoxin exposure is far more common than we might expect. In fact, it is highly likely that you have lived or worked in a water-damaged indoor environment in your lifetime!

Mycotoxins have a wide array of harmful effects on the body. They are carcinogenic, mutagenic, estrogenic, immunotoxic, nephrotoxic, hepatoxic, and neurotoxic. However, a growing body research indicates that mycotoxins also have a detrimental impact on the gut microbiota. The crosstalk between mycotoxins, the gut mucosal immune system, and the gut microbiota may play a key role in the development of chronic inflammatory response syndrome (CIRS), a complex, multi-faceted illness caused by exposure to biotoxins, a family of compounds that includes mycotoxins.

Mycotoxins interact with the gut microbiota

Mycotoxins impair gut health on a structural and functional level by disturbing the normal morphology of intestinal epithelial cells, by inducing leaky gut, reducing levels of beneficial bacteria, enhancing the growth of gut pathogens, and by inducing gut inflammation.

In addition to reducing levels of beneficial bacteria, mycotoxins also promote the growth of pathogenic microbes. Ochratoxin ingestion increases the growth of facultative anaerobes, including coliform bacteria. A combination of aflatoxin and fumonisins enhances the growth of Shiga toxin-producing Escherichia coli, a serotype of E. coli that causes diarrhea, UTIs, and bloodstream infections. (4)(5)

The intestinal epithelium, a layer of cells that forms the luminal surface of the small and large intestine, acts as a barrier to block the entry of pathogens, toxins, and foreign antigens into the systemic circulation. Trichothecenes, fumonisins, and aflatoxin suppress the expression of tight junction proteins, which link epithelial cells together, thus promoting the development of leaky gut. They also decrease the production of mucin, which helps regulate intestinal permeability and reduce IL-8, a cytokine that defends the gut against pathogens. These two effects increase a person’s susceptibility to gut infections.

In chickens, mycotoxins in feed have been found to induce apoptosis (cell death) of small intestinal cells.

Trichothecene mycotoxins inhibit the D-glucose/D-galactose sodium-dependent transporter (SGLT1) and the D-fructose transporter (GLUT5) in the GI tract. Inhibition of these transporters impairs carbohydrate absorption and may promote bacterial overgrowth.

Mycotoxin exposure may increase an individual’s risk of acquiring bacterial, viral, and parasitic gut infections by decreasing intestinal immunity, which normally defends the gut against pathogen colonization. In chickens, ochratoxin exposure in feed increases the risk of viral gut infections and enhances the virulence of intestinal parasites. Also in chickens, Fusarium decreases populations of CD4+ and CD8+ cells, key immune cells. The effectiveness of antiparasitic drugs is decreased in the presence of high levels of circulating mycotoxins, suggesting that mycotoxin exposure should be addressed first in a treatment plan before attempting to eradicate parasitic infections. (9)

There are several factors that potentiate the harmful effects of mycotoxins on the gut. These include the following:

A diet high in grains, conventionally-raised meat and dairy, and processed foods increase a person’s exposure to mycotoxins. I recommend that my mold-exposed clients follow the low-mold diet to enhance their recovery. You can learn more about the low-mold diet in my blog post The Low-Mold, Low-Salicylate Diet for Mold Illness. 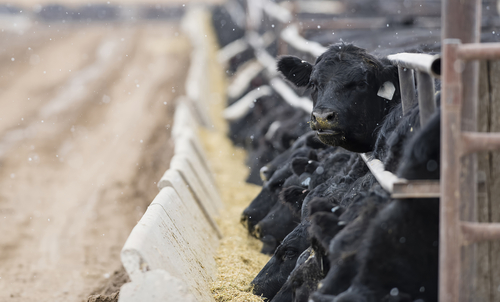 Grains are commonly contaminated with mycotoxins. When we eat meat and dairy from animals fed mycotoxin-containing grains, we increase our own dietary mycotoxin intake.

Antibiotics disrupt the commensal gut flora, which plays a role in mycotoxin processing and detoxification. If you have experienced mold illness and are working to clear gut infections, I recommend using antimicrobial herbs and probiotics rather than antibiotics, if possible. Intense antibiotic treatment for Lyme disease really set me back in my own recovery from mold illness, presumably due to the adverse effects it had on my gut microbiota.

Psychological stress and physical stress (such as excessive exercise, a lack of exercise, or poor sleep habits) alter the composition of the gut microbiota and may reduce its inherent mycotoxin detox capacity.

Exposure to other biotoxins

Exposure to other biotoxins in water-damaged buildings, such as bacteria (Lyme disease is a common co-exposure in mold-exposed people) and microbial VOCs, may further increase gut toxicity.

Variations in CYP genes, which code for the production of cytochrome p450 enzymes, may impair liver detox and prevent the liver from effectively neutralizing and excreting mycotoxins. FUT2 genes that affect the gut microbiota may also play a role. I personally have CYP and FUT2 genetic variations and believe they played a role in my extremely heightened sensitivity to mycotoxins. I am now offering genetic testing through my clinical nutrition practice; this testing can help uncover genetic variants that may be affecting your ability to recover from mycotoxin-induced illness. You can learn more about my DNA testing and nutrigenomic services by scheduling a free 15-minute consult here.

How to restore your gut health after mycotoxin exposure

The first step in restoring your gut health is to remove yourself from the mycotoxin-contaminated environment. If you don’t permanently remove yourself from the contaminated environment, it is unlikely that you will ever become completely well. Note that the recovery process is not immediate – it takes time to bind mycotoxins, usher them out of the body, restore the health of the gut mucosal immune system, and reestablish a healthy gut microbiota.

The next step is to replenish your gut with probiotics. Beneficial gut bacteria bind mycotoxins and prevent them from being absorbed in the GI tract. The most effective mycotoxin-binding probiotic strains are Lactobacillus rhamnosus, L. plantarum, L. casei, and Propionibacterium freudenreichii. (10)(11)(12)I encourage you to supplement with a multi-species probiotic (such as this one) that contains these strains to reduce your mycotoxin load and promote detoxification. I also highly recommend Saccharomyces boulardii, a beneficial yeast that binds ochratoxin. (13) Soil-based probiotics, such as Prescript Assist or MegaSporeBiotic, may be beneficial for repairing leaky gut induced by mycotoxins. Probiotics also help restore gut mucosal immunity, which is damaged by mycotoxins.

Mycotoxins are inhibitors of protein synthesis; this is one of the mechanisms by which they break down intestinal epithelial cells and induce nutrient malabsorption. I recommend that people consume bone broth or collagen peptides daily as a source of amino acids for rebuilding a damaged intestinal epithelial barrier. I make my own bone broth at home, usually using chicken bones, and my favorite brand of collagen peptides is Vital Proteins Collagen Peptides, which come from pasture-raised cows.

Many people ask about whether they should include fermented foods in their diet as a source of probiotics if they are mold and mycotoxin-sensitive. Fermented foods do contain small amounts of mold, which may be irritating for some people. I personally had to abstain from fermented foods for about 6 months during my recovery process. However, I have been able to gradually introduce them as I’ve lowered my body burden of mycotoxins. 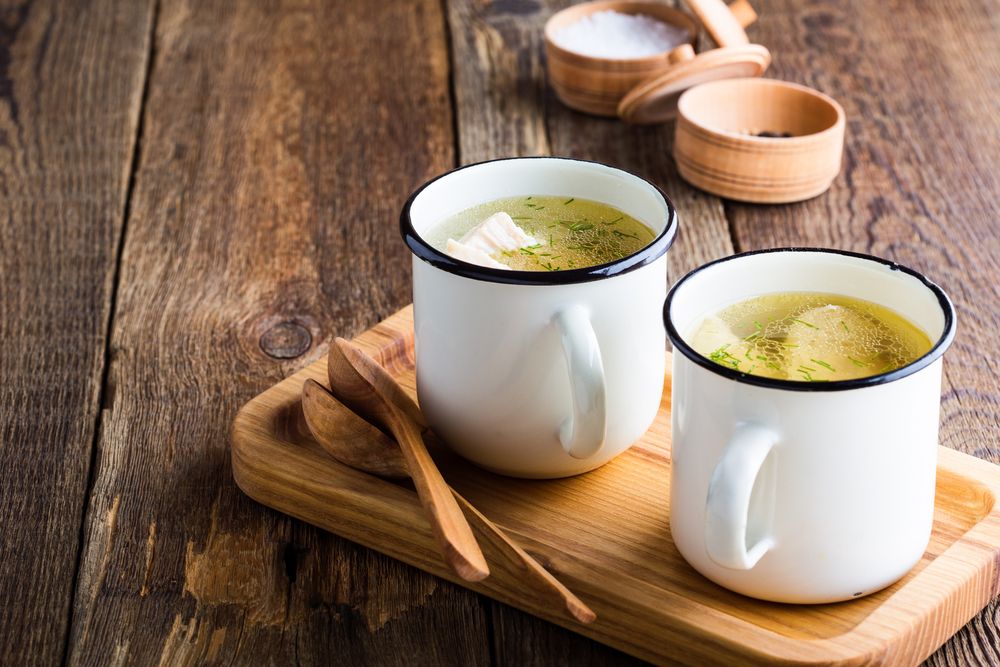 Bone broth provides the gut with easily-assimilated amino acids that can be used to repair intestinal damage induced by mycotoxins.

Binders are compounds that bind mycotoxins (and other biotoxins) in the GI tract and prevent them from being recirculated through the liver and GI tract. They prevent the enterohepatic recirculation of mycotoxins. Cholestyramine, activated charcoal, bentonite clay, chlorella, and modified citrus pectin are a few examples of binders that reduce total mycotoxin load. Binders can be constipating, so you may need to experiment a bit to find the one that works best with your digestive system.

As I mentioned above, your diet can be a significant source of mycotoxins, especially if it is centered around grains, conventional meat and dairy, and other processed foods. The implementation of a low-mold diet reduces the load of mycotoxins entering the GI tract. You can learn more about a low-mold diet in my post The Low-Mold, Low-Salicylate Diet for Mold Illness.

Disclaimer: This post contains affiliate links. I will receive a small commission, should you choose to purchase any of the products mentioned on this page. This affiliate income helps support my website and allows me to continue providing you with valuable, free information on health and nutrition.

1 thought on “Are Mycotoxins Hurting Your Gut Health?”