The human brain is a complex organ composed of billions of neurons continuously firing electrical signals that control what we do, think, and feel. However, many people do not realize that the human body also has a “second brain,” located in the gut, that plays an equally important role in regulating our behaviors, thoughts, and emotions. Fascinatingly, research indicates that factors that disrupt gut health also influence the brain and may contribute to the development of mental health disorders such as anxiety and depression. The profound discovery of the gut-brain connection lends an all new meaning to the expression “a gut feeling!” Listening to and taking care of our guts may represent a new frontier in the prevention and treatment of mental health disorders.

What is the “second brain?”

Mental illness is unfortunately quite common in the United States. Current statistics indicate that one in six American adults has a mental illness such as depression or anxiety. (1) The conventional medical approach to treating mental health disorders focuses heavily on medication and views the brain as an entity distinct from the rest of the body. However, an emerging body of research indicates that the gut and brain are intrinsically linked and that the health of one organ significantly influences the other.

A growing body of scientific studies demonstrates the association between gut bacteria and mental health. In animal studies, mice with lower levels of beneficial Lactobacilli have been found to be less resilient in stressful situations and more prone to depression. (3) In humans, depressed patients have demonstrated significantly altered gut microbiome composition compared to healthy controls, with a preponderance of pathogenic bacteria and lower levels of beneficial bacteria. (4) Patients with bipolar disorder and obsessive-compulsive disorder also have significantly altered gut microbiomes. (5)(6) This research suggests that the “second brains” of patients with mental health disorders are miscommunicating with the brain, leading to unhealthy alterations in mental function.

Researchers have uncovered two potential mechanisms by which gut bacteria interact with the enteric nervous system, and subsequently, the brain itself:

Strategies for balancing the microbiome and optimizing mental health

To achieve optimal mental health, it is crucial that we establish a healthy gut microbiome. By eating a nutrient-dense, whole foods diet, supplementing with probiotics, limiting antibiotic use, and reducing stress in our lives, we can create a healthy and happy gut and brain!

Studies show that traditional, whole foods are superior for mental health. (9) One of the reasons why a whole foods diet benefits mental health is because it contains prebiotic fiber, a type of fiber that feeds beneficial gut bacteria and fuels their many metabolic activities, including the production of metabolites that quell inflammation and optimize brain function. Fascinatingly, research has found that supplementation with prebiotic fiber alone lowers cortisol, a hormone involved in the stress response. (10) Prebiotic fiber can be found in supplemental forms such as inulin and galactooligosaccharides (GOS), as well as in foods such as asparagus, garlic, onions, leeks, apples, and legumes. Consuming fermented foods such as sauerkraut and kimchi may also benefit mood by supplying the gut with live, probiotic bacteria. When gut bacteria are well-fed and happy, they help create a happy, healthy brain! 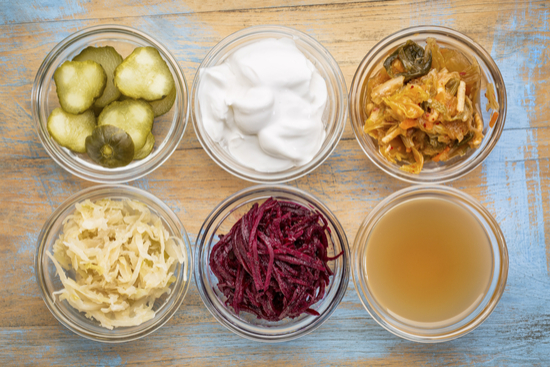 Research indicates that probiotics may act as natural antidepressants by producing metabolites that suppress inflammation and the sympathetic nervous system response. In animal models of psychological stress, supplementation with Bifidobacterium infantis, Lactobacillus helveticus, and Lactobacillus rhamnosus has been found to reduce anxiety and depressive behaviors. (11)(12)(13)

Disruption to the gut microbiome by antibiotics has been found to impair cognition by disturbing the balance of beneficial and pathogenic bacteria in the gut and the neuroactive substance they produce. (16) To promote optimal mental health, limit antibiotic use to times when it is essential, and always be sure to take a probiotic to restore beneficial gut bacteria once the course of antibiotics has been completed.

Psychological stress perpetuates a vicious cycle of poor mental health by lowering levels of beneficial bacteria and increasing levels of bacteria that promote inflammation and the sympathetic nervous system response. (17) Stress-reduction practices such as yoga and meditation may benefit mental health by helping you maintain a healthy “second brain.”

Mental illness: It’s not “all in your head!”

If you or someone you love has experienced depression, anxiety, or other mental health issues, know that it is not “all in your head;” in fact, much of the problem may lie in your gut! Our growing understanding of the gut-brain connection represents a new frontier in the treatment of mental health disorders and means that mental health problems need not be a life sentence. By restoring balance to the gut microbiome using a whole foods diet, probiotics, and stress reduction techniques, it is entirely possible to improve your mood and create optimal mental health that lasts a lifetime.