Cold and flu season is officially here! I’ve personally been battling what feels like the beginning of a cold for the past week. The last time I had a cold, it left me with no hearing in one of my ears for 10 days due to severe congestion (that was a fun time…), so this time around, I’m determined to keep this virus from morphing into something bigger. When it comes to fending off and treating colds and the flu, I’m not a fan of the flu vaccine or pharmaceutical drugs. Instead, I turn to the healing power of natural foods. In this blog, I discuss eight of my favorite foods for fighting colds and flu. Each of these foods is affordable, widely available, and taps into your body’s innate healing abilities so you can kick colds and the flu to the curb and get back to feeling your best!

Why I’m not a fan of the flu vaccine

I’m guessing some of my readers may ask me this question, so I figured I’d start off by addressing it here. First of all, the flu vaccine is massively over-hyped. Three separate Cochrane systematic reviews (essentially the gold standard of medical research) have elucidated some concerning findings regarding the flu vaccine:

“…There is evidence of widespread manipulation of conclusions and spurious notoriety of the studies [on the flu vaccine in industry-funded studies].” (5)

This means we consumers shouldn’t blindly trust the flu vaccine propaganda that is directed our way. The efficacy and safety of the flu vaccine are FAR more questionable than we’ve been led to believe.

When it comes to colds, drugs are not the answer!

Many people turn to pharmaceutical drugs, including antihistamines, decongestants, and in some ill-advised cases, antibiotics, when they come down with a cold. While antihistamines and decongestants relieve symptoms, they do nothing to prevent or shorten the duration of a cold. They also come with potential side effects such as insomnia, nervousness, voiding dysfunction (in men), tachycardia, and an increased risk of hypertensive emergencies. (6, 7) Chronic use of antihistamines increases the risk of dementia and impairs memory consolidation. (8, 9) I say “no thanks!” to these types of drugs.

Antibiotics are ineffective for cold and flu

Based on this evidence, the pharmaceutical options available for preventing and “treating” colds and the flu leave much to be desired, in my opinion. Instead of getting the flu shot or taking antihistamines and decongestants when I get sick, I use nutrient-dense, whole foods to fortify my body and fight off seasonal viral infections.

Cod liver oil has a long history of use for preventing and treating respiratory tract infections. Centuries ago, Northern Europeans consumed cod liver oil to protect themselves from illness in the winter, and in the early 20th century, it was common for mothers to give cod liver oil to their children prophylactically. (11)

What’s the deal with cod liver oil? Why is it so helpful for preventing respiratory ailments? Research has found that host resistance and susceptibility to influenza depend on the ratio of vitamin D to vitamin A activity in the body. (12) Vitamin D stimulates the body’s production of antimicrobial peptides, which protect the respiratory tract from pathogens, and increases the function of macrophages, which engulf and destroy viruses and bacteria. Vitamin A regulates the growth and differentiation of epithelial tissue in the airway and the maintenance of lung alveoli; it also has direct antiviral activities. Cod liver oil just so happens to be an excellent source of vitamins A and D. Perhaps most importantly, it contains these two vitamins in the optimal ratio for promoting robust immune function.

To prevent illness or accelerate your recovery from a cold or flu, I recommend taking 1 tsp per day of a high-quality cod liver oil, such as Nordic Naturals Arctic Cod Liver Oil, per day. You can continue this regimen throughout the winter months to optimize your vitamin A and D levels.

Researchers have found that bovine colostrum, the first milk produced by a cow 24 to 48 hours after a calf is born, is at least 3 times more effective than vaccination for preventing the flu! (13) Furthermore, supplementation with bovine colostrum in children reduces the number of episodes and hospitalizations for upper respiratory tract infections. (14)

Bovine colostrum is very similar to human colostrum; it contains potent bioactive compounds, such as immunoglobulins and lactoferrin, that kick your body’s natural pathogen-fighting processes into gear, without the potential side effects of the flu vaccine. My favorite brand of bovine colostrum is Sovereign Laboratories Colostrum-LD. Their colostrum is liposomal, making it extremely bioavailable. It is also thoroughly tested to maximize its content of immunoglobulins, growth factors, lactoferrin, and other cold and flu-fighting compounds.

Probiotics, found in fermented foods, enhance the activity of the innate immune system and thereby help defend the body against influenza and non-influenza viruses. Bifidobacterium longum has been found to improve clinical symptoms, reduce mortality, suppress respiratory tract inflammation, and decrease virus titers, cell death, and pro-inflammatory cytokines in animals infected with influenza. (15) Oral intake of a probiotic-rich fermented milk drink was found to boost influenza-specific IgA and IgG antibodies, enhancing the immune response to the influenza virus. (16) Lactic acid bacteria also reduce influenza virus replication in the lungs. (17) If you tolerate dairy, full-fat fermented dairy products such as yogurt and kefir should be part of your nutritional arsenal for fighting off the flu.

If dairy doesn’t agree with you, kimchi is a great dairy-free option! In fact, a recent study found that lactic acid bacteria extracted from kimchi, a traditional fermented vegetable dish from Korea, has powerful anti-influenza activities! (18) You can find raw kimchi at most health food stores and Asian markets. 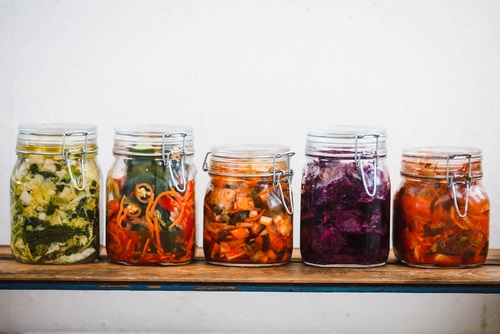 The probiotics in fermented foods boost your immune system, protecting you and helping you recover from colds and flu!

Raw honey in general, but particularly Manuka honey, has potent anti-influenza effects. (19) Honey is also an effective anti-tussive (it can prevent or relieve a cough). (20) Mix one tablespoon of raw, local honey or manuka honey into 8 ounces of hot tea – ginger tea is an excellent option because it also has antiviral benefits.

Garlic doesn’t just ward off vampires! 😊 It also defends your body against the cold and flu! Researchers in Iran have found that garlic has antiviral activity against the influenza virus in cell culture studies. (21) There are many ways you can incorporate cold and flu-fighting garlic into your diet. Mince up a couple cloves of garlic and add to a stir-fry, make garlic-infused olive oil, or add to an omelet or scrambled eggs at breakfast.

When most people think of licorice, they think of candy; however, the “original” licorice is actually a root from the Glycyrrhiza glabra plant. Glycyrrhizin, one of the most-studied constituents of licorice root, inhibits influenza virus activity and reduces proinflammatory gene expression triggered by viral infections. In fact, it has long been used in traditional Chinese medicine in herbal formulations for respiratory ailments. (22, 23) The easiest way to consume licorice root is in a tea, such as Traditional Medicinals Licorice Root tea. However, if you have high blood pressure or estrogen dominance, licorice root is contraindicated because it has blood pressure-raising and phytoestrogenic effects.

Medicinal mushrooms can be powerful allies in your fight against seasonal viral respiratory infections. The glucans (a special type of polysaccharide) found in Shiitake, Reishi, and Chaga mushrooms stimulate cellular and humoral immunity, ultimately resulting in lower influenza viral load. (24) Shiitake mushrooms have been used to alleviate symptoms of the common cold for countless generations in Traditional Chinese Medicine. (25)

Finally, olive oil and olive leaf are also potent immune modulators and anti-viral agents. Hydroxytyrosol, a polyphenol found in olive oil and olive leaf, induces morphological abnormalities in the influenza virus, reducing its ability to infect the body. (26) Oleuropein, another polyphenol found in olive leaf and oil, has documented antiviral activities against many viruses; it appears to destroy viruses by compromising the integrity of the viral envelope, the membrane that surrounds and protects viruses. (27)

In the face of cold and flu season, you don’t need to leave your well being up to chance! By fortifying your body with natural immune-boosting and anti-viral foods, you can significantly increase your chances of having a healthy, disease-free winter!

I’d love to hear your thoughts! What strategies do you use to protect yourself from colds and the flu? Do you eat any of the foods I included in this blog? Let me know in the comments below!